The Commonwealth War Graves Commission (CWGC) website records three entries for Plumtree churchyard: Alfred Henry Longden, Thomas Mitchell and George Taylor (below, left).  All three are buried in the churchyard, and their plots all have headstones.

However, although the first two names appear on the Plumtree War Memorial, until 2014 the name George Taylor did not.  How did this discrepancy come about?

George Taylor died on 31st January 1921, aged 25, some two years after the end of the First World War.  Did this delay render him ineligible to have his name included when the war memorial was erected?

The answer to that is ‘No’.  The CWGC website states: “The Commission commemorates those who died during the First and Second World Wars in service or of causes attributable to service.  The designated war years are First World War 4 August 1914 to 31 August 1921...”.  Thus George Taylor’s death occurred within the qualifying period.

So, was George Taylor’s name omitted because his death was unrelated to the War?  Several factors mitigate against this theory:

the inscription on his headstone (above, right) reads: “In memory of George Taylor, who faithfully served his King and Country during the Great War from August 1914 to March 1919 in the 8th Batt'n. Sherwood Foresters”.  This suggests that his death was associated with the War;

the fact that his name appears on the CWGC website indicates that the authorities considered his death to be war-related;

his death certificate records he died due to Tuberculous Enteritis, a condition associated with serving the in First World War.

It turns out that the most probable reason for George Taylor’s name being omitted from the War Memorial isn’t very mysterious at all.  The War Memorial was constructed and unveiled with a service of dedication on 9th January 1921 - 22 days before George Taylor’s death.  Since he was survived by very few close members of his family, there was probably no-one around to attempt to get the omission rectified.  Also, the War Memorial had been funded by public subscription, and there weren’t funds available to carry out any further work on it.

At their meeting on November 11th 2013 (an auspicious date), Plumtree Parish Council resolved to investigate the possibility of refurbishing the Plumtree War Memorial, especially the lettering of the First World War names which was now almost illegible.  There are specialist local firms that are capable of carrying out this work to the required standard, and the Council thought that it would be a worthwhile enterprise in this, the centenary year of the outbreak of the War.

Which raised the question: as part of the refurbishment, should George Taylor’s name to be added to the eighteen existing entries for the First World War?

He certainly has the pedigree: he was born on 23rd September 1895 and baptised in Plumtree Church on 27th October 1895.  His father was William Taylor and his mother was Mary Taylor. George’s family are real Plumtree-ites; both parents, his 11 siblings and three of his grandparents were baptised in Plumtree church.  His mother’s maiden name was Astill - a name well-known in Plumtree.

It’s actually not unusual to add a name to a war memorial, as the decision (and funding) is a local one rather than involving central government. However the War Memorial Trust strongly recommends that the local community is made aware of the additions to the existing memorial before any work begins. 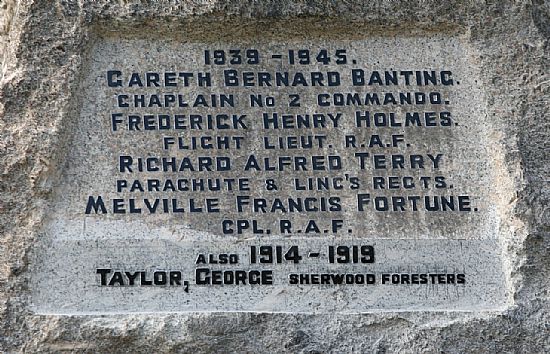 As the Memorial stands within the grounds of Plumtree Church, the work had to be approved by the Diocese of Southwell and Nottingham.  Accordingly, the churchwardens submitted a 'Petition for Faculty' form and received the resultant Faculty Notice (required before the work can legally be instigated) in June 2014.

Nottinghamshire-based firm Bonsers were contracted to carry out the refurbishment work which commenced on Monday 21st July. There wasn't space for an additional name on the World War 1 side of the memorial so an area was cut below the list of World War 2 casualties.

Finally, George Taylor's name was added on 29th June 2014; in time for the World War 1 commemoration service that was held at Plumtree Church on Sunday August 3rd 2014.