The following account of the dedication of the "Johnson Memorial window" in 1963 was printed in a deanery or diocesan magazine [1] the origin of which is sadly unrecorded. The article is reproduced below verbatim with explanatory information added in the form of pop-up footnotes.

Click on the numbers in square brackets [n] to display further details in a popup window. Click outside the popup window to close it. 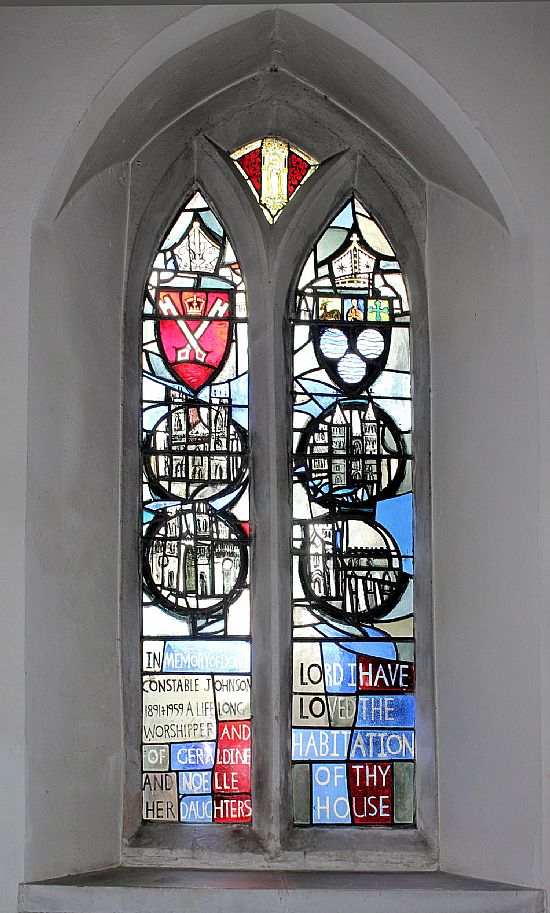 The service of Dedication was conducted by the Rector [2] on Sunday, Sept. 22nd, in the presence of a large congregation, including three generations of the Johnson family.

The window, situated at the west end of the ancient south aisle [3], was made by Miss Christine Bodycombe [4], a young artist recommended by Mr. John Piper [5], of Coventry Cathedral fame.  It is the gift of Mr. G. D. Johnson [6], in memory of his wife [7], a life-long worshipper, and of his two daughters [8].

Mr. Johnson was for many years Churchwarden of a nearby parish and both he and his late wife loved the House of God and never missed their Sunday worship.  They belonged to that old school, now disappearing, which regarded church-going on the Lord's Day as a sacred duty and an act of love.

It was this fact which led the Rector, in choosing a suitable theme for the window, to design it on the text, "Lord, I have loved the habitation of Thy House." (Psalm 26, verse 8.) [9]. There are four roundels depicting the minsters of York, Lincoln and Southwell and the parish church of Plumtree; these are surmounted by the arms of the dioceses of York and Southwell.  All this gives the window historical interest for from ancient time Nottinghamshire with the Minster of Southwell was included in the diocese of York.  In 1837, the county and its churches were transferred to the diocese of Lincoln; in 1884 the diocese of Southwell was created.

Through the centuries and amid these diocesan changes Plumtree Church has stood firm on its present site; it is one of the oldest (if not the oldest) of the churches of the county, dating back to the 9th century.  The massive tower was built on to existing Saxon work by the Normans about 1100.  In order to harmonise with the ancient south aisle, the window is executed in rich red and blue, the dominant colours of 12th century stained glass; the irregular lettering and text is also of 12th century style.  Thus we have a window of modern treatment and interpretation of what is basically centuries old.  To quote a writer [Sidney H. Heath] on stained glass: "A modern maker of stained glass will tell you that much of the gem-like colour and brilliancy of the Early English period was due in no small measure to the uneven hue of colour arising from the irregular mixing of the pigments with the vitreous materials in the cricibles[sic].  The light being unequally transmitted produced that remarkable richness and depth of colouring that is at once the delight and the despair of the modern worker in coloured glass." [10]

If you want to see something of this rich brilliance, visit the church in the late afternoon, stand by the lectern and look at the window as the setting sun shines through the stained glass—don't be in a hurry to leave and you will see new beauties of colour as the changing light plays on the glass. [11]

We are grateful indeed to the donor, to Miss Bodycombe for her work, and to Mr. John Piper and the Archdeacon of Nottingham for their keen interest, encouragement and advice.  Already we have had a number of visitors to see the window and doubtless there will be many more for it is the first of its kind in the diocese.

[1] Deanery Magazine. This article appeared in a deanery magazine (unknown title and date). 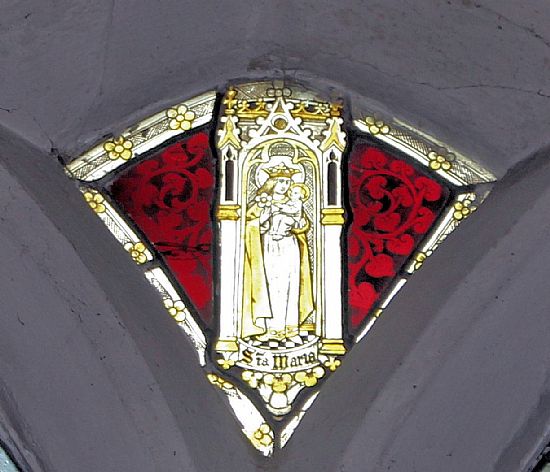 [3] The window, situated at the west end of the ancient south aisle was installed in 1963 and is referred to as the 'Johnson Memorial Window'. It is illustrated in the main body of this article.

It replaced the original window, which was described in the 1936 Terrier and Inventory as:

This figure is still present at the top of the new window between the two lights, see right.

[4] Christine Bodycombe was a pupil of the artist John Piper. She was a graduate of the Swansea College of Art and became a stained glass artist in the early 60s. She died in 1968 at the age of 28.

[5] John Piper (1903 - 1992) was an English painter, printmaker and designer of stained-glass windows and theatre sets. He is particularly known as a war artist and for his design of the 81 foot high baptistry window installed in Coventry's new Cathedral in 1958. This window comprises 195 panes, ranging from white to deep blue.

[6] Mr. G. D. Johnson Gerald Drinkwater Johnson (1885 - 1964). The window, which was installed in 1963, was commissioned by and gifted to the church by Mr Johnson in memory of his wife of 46 years, Doris Constable Johnson, and two of their daughters, Geraldine and Noelle.

Mr Johnson was a churchwarden at Radcliffe-on-Trent parish church but moved to the south of England when he retired. He worshipped at Plumtree when visiting his son, Philip Bagshaw Johnson, who later served for 27 years as a churchwarden at St Mary’s, Plumtree and was responsible for organising the restoration of the Victorian decoration in the 1980s.

[7] His wife Doris Constable Johnson (née Bagshaw) was born in Sheffield in 1891, and died in Felpham, Sussex in November 1959.

Geraldine Johnson (1914 - 1945) died during the Second World War of a streptococcal virus, having been a nurse.

Noelle Johnson (1919 - 1920) died as an infant of 'the sleeping sickness'. She is buried in St Giles's churchyard, West Bridgford.

Philip Bagshaw Johnson (1921 - 2013) who served for 27 years as a churchwarden at St Mary’s, Plumtree and was responsible for organising the restoration of the Victorian decoration in the 1980s.

Lord, I have loved the habitation of thy house, and the place where thine honour dwelleth.

[10] "To quote a writer on stained glass". The full quotation is:

"With regard to the styles and periods of transition it may be said concerning painted glass, as of architecture, that there was a continual putting off of the old fashion, and a putting on of the new. As regards both material and colour the glass of the Early English period has never been approached, although a modern maker of stained glass will tell you that much of the gem-like colour and brilliancy of the glass of the thirteenth century was due in no small measure to the uneven hue of colour arising from the irregular mixing of the pigments with the vitreous materials in the crucibles.

Anyone who cares to examine closely a piece of genuine glass of this early period, cannot fail to notice the uneven character of the surfaces, and the smallness of the pieces used, both indications of crudeness in production. But the early workers, like true artists, turned the faults in the manufacture of the raw material to positive advantage, by deepening the hues for the shadows and obtaining the half-tones without the use of shading; and the light being unequally transmitted, produced that remarkable richness and depth of colouring that is at once the delight and the despair of the modern worker in coloured glass.

As we look at a piece of ancient glass in a village church at the present day we must bear in mind that the great surfaces of the whitewashed walls were in all probability covered with fresco paintings, which not only served to illustrate the gospel history, but to lead the eye gradually to the stronger colours of the windows. Nowadays old glass does not look its best in the strong reflected glare thrown by whitewashed walls, and it requires a certain amount of "dim religious light" to reveal to the full the harmonious brilliancy and unequal display of light that is so characteristic of our earliest specimens of coloured glass."

Heath, Sidney H. "Our Homeland Churches and How to Study Them", published 1912.

[11] new beauties of colour as the changing light plays on the glass. The images below are representative of the colours in the window, taken in late afternoon. 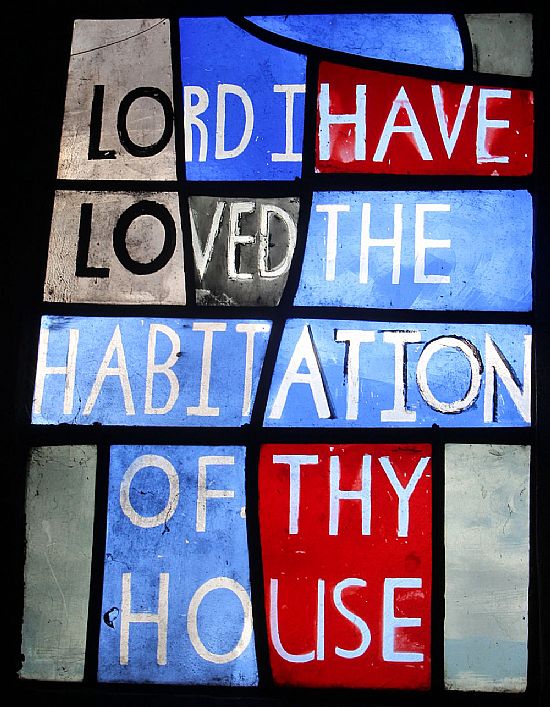 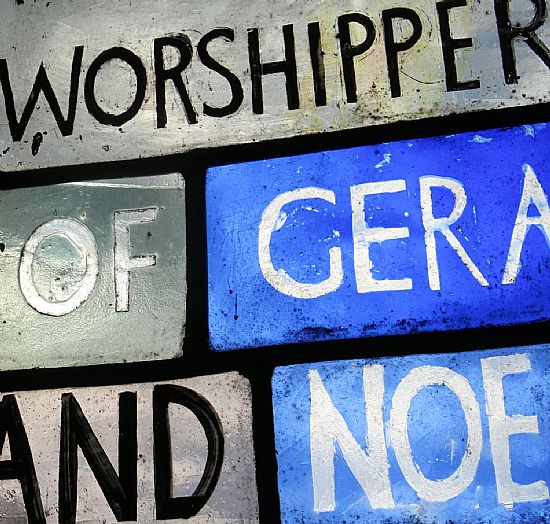 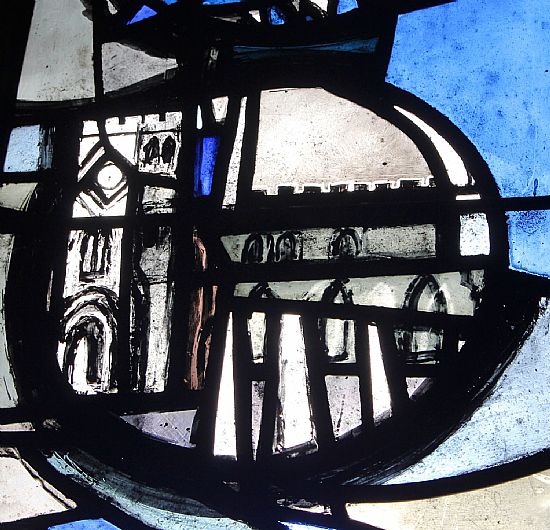