The inscription on the back of the processional cross in Plumtree church reads: 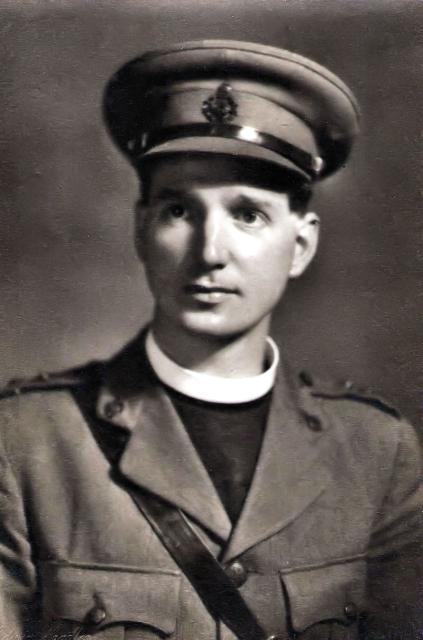 Gareth Bernard Banting (pictured left) was the son of Revd Edgar Banting and Charlotte Emily Banting of Plumtree Rectory.  Revd Banting senior was Rector of Plumtree from 1937 to 1957.

Revd Gareth Banting took holy orders after graduating from Cambridge.  He became the much-liked Chaplain of No. 2 Commando and served in all their campaigns of 1943-1944.

While Allied armies were fighting their way across Europe in the autumn of 1944, a small force of Royal Marine and Army commandos was preparing to capture the Albanian town of Saranda (also spelled "Sarande") to help the Albanian partisans harass the retreating German forces. Saranda was the port through which German army units (which had been involved in the occupation of Corfu and mainland Greece) were now withdrawing.

Reports of exactly what happened are sketchy – after all, the troops were front line fighters, not clerks; however it is believed that No 2 Commando operations began with their landing at a beach about six miles north of Saranda. It soon became apparent that the only road that they could use to approach their attack positions at Saranda was covered by more than 20 artillery positions which quickly went into action against the leading troops. It also became clear that there were significantly more German soldiers defending Saranda than was first thought; so the veteran fighters of No 40 Royal Marine Commandos joined No 2 Commando.

The combined force of No 2 and No 40 Commandos battled on through atrocious terrain and monsoon-type weather conditions. After a bitterly-contested battle, the town of Saranda fell on the afternoon of October 9th 1944.

The next day, Revd Banting was attending to the burial of British Commandos and German soldiers when he stepped on an anti-personnel mine. He died while being carried to an aid post, on October 10th 1944; he was 32 years old.

An extract from the No 2 Commando War Diary reads:

"Revd. Banting takes party from 3 Tp. to bury Capt. Parsons, Lieut. Coyle, Gnr. Clarke, and Pte. Lyons. After burial he moved fwd. to bury German dead in the same posn., but is blown up on a mine. Stretcher party finds he has died of wounds - carried back to Saranda by M.O. before nightfall."

Revd Banting was buried the following day at 3pm.

Naturally, Gareth's parents were devastated to learn of his death. His mother, Charlotte, never fully recovered from the shock. A memorial card was printed and sent to all wellwishers.

Following the end of the war in Europe, an Army Graves Registration Unit entered Albania with the task of concentrating the remains of Commonwealth Servicemen, lost in the struggle to secure Albania freedom, into a site chosen in the capital, Tirana.  Due to the political situation in the country, this task could not be completed. However 52 sets of remains were recovered in the short time available. Eventually, in 1955, after repeated requests to enter Albania were refused, the Commonwealth War Graves Commission (CWGC) took the decision to commemorate the 38 identified casualties on special memorials erected in Phaleron War Cemetery in Greece, a few kilometres south-east of Athens.

This situation was reflected in a letter that Edgar Banting wrote to lifelong Plumtree resident, Jennie Phimister, in November 1960, in response to an article that she had sent him and which appeared in the Sunday Post on Remembrance Sunday 1960. Jennie later wrote to Scottish newspaper, The Sunday Post, providing more information about Gareth; she received a touching reply.

And that was the end of the story of Revd Gareth Banting. Or was it?

In 1994, the changing political situation in Albania meant that, at last, a CWGC representative managed to gain access. He discovered that the Communist authorities had moved the original individual burials to an unmarked collective grave located under a path near the university buildings in Tirana.

At the beginning of 1995, the 38 memorials were removed from Phaleron and re-erected as close as possible to the site of the mass grave, in an area designated the Tirana Park Memorial Cemetery.  The Cemetery is situated in the Great Park of Tirana, Albania, on the main boulevard, close to the Hotel Sheraton and the Main University Buildings. Amongst the Commonwealth War Grave memorials in this cemetery are six from No 2 Commando; one of these is dedicated to Revd Banting.

We acknowledge the use of information from the Commando Veterans Association and Commonwealth War Graves Commission websites in the preparation of this item.