In Plumtree churchyard, to the south-east of the chancel, beside the path to the north gate, can be found the headstone of former Plumtree resident Richard Pritchet, who died on March 21st 1760 aged 83. 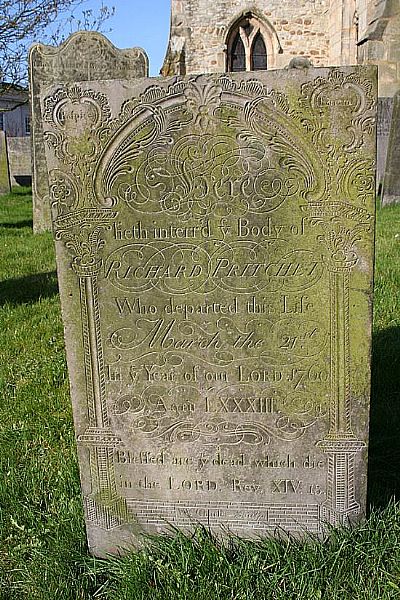 The headstone is in remarkably good condition considering it is over 250 years old.

Richard is described in the burial register as "An Old Bachelor".  However his other, nobler, epithet is founder of The Pritchet Trust, a charity whose aims were "...to provide for the poor of the parish of Plumtree."

The Further Report of the Commissioners for Inquiring Concerning Charities (compiled in the mid 1800s) has the following description of the Pritchet Charity:

"It is stated in a tablet in the church of Plumtree, that Richard Pritchett gave, in the year 1755, the sum of £25 with the yearly interest of which twenty twelvepenny loaves were to be bought, and disposed of by the minister and churchwardens to five poor widows of the town of Plumtree, who received no collection from the parish; viz. five loaves on Christmas-day, five loaves on Easter-day, five on Whitsunday, and five on Michaelmas-day, and to be continued annually, for ever.

"This benefaction is also noticed in the Parliamentary Returns of 1786; and it is there further added, that a person unknown had given £9 for the poor not receiving parish relief; and that both sums were then vested in John Barlow, and produced £1 6s 11½ per annum.

"The whole sum, amounting to £34 remained in John Barlow's hand, secured by his bond, until the year 1822, when it was invested in the Nottingham savings bank, in the names of a churchwarden and overseer of the poor of Plumtree, at the interest of £4 per cent. The interest, amounting to £1 7s is received, either yearly or once in two years, about the month of November, and shortly after its receipt is distributed, in money, at a vestry meeting of the parishioners, amongst the poorest people of the parish, a large portion being given to a few poor widows.

"No part of this charity has been distributed in bread, pursuant to the directions in the tablet, for many years."

With acknowledgements to the article on the Victoria County History website by Sheila Leeds.

Note that there was no mention of the location of the 'tablet' referred to in the first paragraph; it has probably long since disappeared, since it doesn't appear on the church's current inventory. However, the 1936 Terrier and Inventory states "in the Belfry there is a notice of the Benefaction of Richard Pritchett".

At this point it’s worth clarifying the term 'twelvepenny loaves'. Strict laws, stretching back to the Assize of Bread and Ale Act of 1266, periodically defined the standard weight of loaves of bread, relative to the prevailing price of grain.

For example, in 1766 an extract from the

In 1917 the charity invested

Statement of Accounts for 1925 notes that ten shillings (50p) each was given to: Elizabeth Astill, Mary Ann Hatherley, Frances Hurst, Sophia Murden, and another, unnamed, beneficiary. As a comparison, 10 shillings would be worth about £25.50 at today's prices.

Statement of Accounts for 1927 ten shillings each was given to: Mary Ann Hatherley, Frances Hurst, Sophia Murden, Mary Jane Davis and Martha Taylor.

On March 6th 1963 the Pritchet Charity was registered with the Charity Commission (Charity number 214896).

The Prichet Charity is still in existence even though it has ceased to have any income or expenditure. Its current trustees are Mike Clark and Revd Trevor Kirkman; its objective remains 'for the benefit of poor widows'.