The words "HE DIED FOR FREEDOM AND HONOUR" are written around the margin of the circular plaque.

Click here for more information about the design of the Memorial Plaques.

Each plaque was engraved with the name of the person it commemorated. In the case of the plaque found by David Oldham, this is "Samuel Benjamin Smith".

Samuel Benjamin Smith's name appears on the Plumtree War Memorial, together with 18 other casualties of the First World War. He was a Private in the 1st / 8th Battalion, Sherwood Foresters (Notts and Derby) Regiment. He died on 14th October 1915, aged 19, and is buried at Cabaret-Rouge British Cemetery, Souchez, France (near Arras). 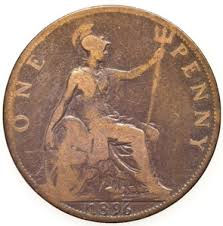 Because of the similarity in appearance to the pre-decimal penny coin, the plaque became popularly known as the "Dead Man's Penny" or "Widow's Penny".

Many families, especially those whose only income now came from what the next-of-kin could earn, felt the plaques were an insult and threw them away in disgust. This could explain why this one was found in a field in Keyworth.